Stuck In The Onesies

If you’ve ever played the game of jacks, you know that if you get stuck in the onesies, you’re forever playing catch up. Stuck in the Onesies is loosely based on a true story. You’ll fall in love with Barb and Ellie, two real-life Donna Reed era moms raising kids and husbands during the tumultuous 60’s in the suburbs of Washington, DC. It’s the story of their relationship, and how they evolved along with the times without intentionally taking part in the bra-burning activities that swirled around them. 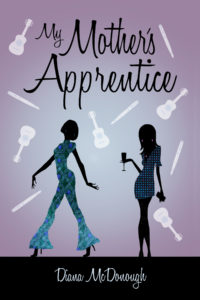 My Mother’s Apprentice tells the story of the daughters, Karen and Ginger. Their paths might have been trailblazed by their mothers, but, Karen and Ginger find many to blaze on their own. Karen does a good job as her “mother’s apprentice,” but Ginger, not so much.