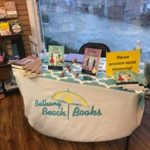 August 6 – Diana did a socially distant book signing at Bethany Beach Books. What a wonderful way to experience “normal” once again!

August 27 – Shorereads Book Club will host a discussion of Stuck in the Onesies. A big thank you to Cindi Krempel for introducing me to Carol Breslau for inviting me to participate. Nothing I like better than talking about Barb and Ellie and the upcoming sequel. #sitosequel
September 27 – Ft. Myers Book Club – A huge thank you to Kaalin Fullilove for inviting me to take part in the Lindsford Book Club in Ft. Myers, Florida discussion about Stuck in the Onesies. If you are part of a South Florida area book club, I would welcome the opportunity to meet with your club.

A big thank you to Suzanne and Steve Marcales for their continued support of SITO. (Pic is at Coffee Beanery on 94th Street in Ocean City. Signing on June 3, 2018.)

My family, the McDonoughs! We always make a crowd of our own. This was at the Bethany Book Store signing in Bethany Beach, DE on June 1, 2018.

I will be doing a meet and greet at Lindsford Clubhouse, on March 15, 2018, and then will return in September to attend their book club meeting (Lindsford Community Book Club). A special thank you to Kaalin Fullilove for setting everything in motion.

Diana made a presentation to the Ecolab E3 Mid-Atlantic Chapter in Frederick, Maryland on May 2, 2018. Diana was a founding member of this international women’s advocacy group for her former employer. She spoke about the inception of E3 and how she managed to advance in her career while writing “Stuck in the Onesies.”

Greetings and Readings in Hunt Valley, MD hosted another “Stuck in the Onesies” book signing. They have been a wonderful supporter of this local author. Stay tuned for another signing in the Fall of 2018 to kick off the sequel. #sitosequel

“Meet and discuss Stuck in the Onesies” with your book club. You can email me at dianwrites@yahoo.com or message me on Facebook.

Stuck In The Onesies – PAPERBACK AND KINDLE

Welcome to Diana’s website and, “From the Hammock,” blog. In her first novel, “Stuck in the Onesies,” that was published in January, 2017. Where she tells the story of two women raising kids and husbands in the suburbs of Washington, D.C. in the turbulent 1960s.

Stuck in the Onesies will give your spirit a lift, your face a good laugh, and your history-buff side a tap on the shoulder.

You’ll fall in love with Barb and Ellie, two housewives raising kids in the tumultuous 60’s in the D.C. suburbs. Their antics make Lucy and Ethel look tame. The husbands, Jake and Will, are also as close as brothers and the friendship becomes more like family than friends. It’s the story of their close relationships, and how they evolve along with the times without the bra-burning activities that swirl around them.

Stuck in the Onesies is more than just a story of two families. The issues of the 60’s are intertwined, racism, women’s rights, the Viet Nam war, just to name a few. Southern roots ran deep and in the ‘60’s (even north of the Mason Dixon line) and those roots were dug up and exposed. The story shows some of its evolution through its characters as well as the events of the decade. Stuck in the Onesies will help you to understand the struggles on both sides and how as a society, we tried to bring equality to everyone. Sometimes we succeeded, and sometimes not. You decide.