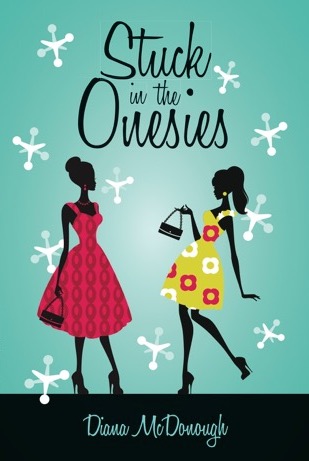 (March 31, 2017) Ocean Pines resident Diana McDonough takes readers back to the 1960s in her novel, “Stuck in the Onesies,” which is loosely-based off her mother and set in the Washington D.C. suburbs.

“It will bring back a lot of memories being it’s a little bit of a history lesson during such a crazy time,” McDonough said. “People will laugh, cry and come away with history and learning about human nature at the same time.”

The novel touches upon racism, women’s rights, the Vietnam War and accessibility to Washington insiders or famous people including President John F. Kennedy, his wife, Jackie, and Tom Jones backstage of his concert.

“It was a different and unusual time,” McDonough said. “There were marches, protests and riots going on. Readers will see an evolution in these characters and how people change or their opinions change as they experience issues. They will see the cost and rewards of loyalty.”

In addition, McDonough wants readers to see how society has changed in the last 50 years in regards to civil rights, race relations and women’s rights.

“Things have changed as a whole in families and society,” McDonough said. “When I started writing I did not intend to include race relations in the story, but it happened with the evolution of my mother, who was raised by parents from the Deep South.”

The 267-page novel begins in Cambridge with scenes in Washington D.C. and Ocean City including camping on Assateague Island and a trip to the Boardwalk.

It took more than 15 years for McDonough to complete her book and the process changed a couple of times. Instead of first person, McDonough rewrote the story from two character perspectives: her mother and mother’s best friend.

She also took classes, joined groups and found time to write on the weekends and nights when not traveling for her job as a sales manager distributor for Ecolab. After retiring last June, her goal was to finish what she started.

“‘Stuck in the Onesies’ refers to playing jacks,” McDonough said. “We played all the time as kids and there is a scene in the book.”

On Jan. 15, “Stuck in the Onesies” became available on Amazon for $12.99 in paperback and $6.99 on Kindle. The Assateague Island Surf Shop on Route 611, Bungalow Love and Sisters, both in Berlin, are also selling the novel.

During the annual gala for the Shirley Grace Pregnancy Center on April 8, McDonough will be having a book sale and signing with all proceeds going to the nonprofit. The event takes place inside the bayfront ballroom at the Ocean City convention center on 40th Street.