Watching Little League games in the freezing spring weather and then in the steamy hot part of summer, I fuss and complain, but wouldn’t have it any other way. Well, maybe we could have lived just a little bit further south, but then it wouldn’t be Berlin, Maryland. Berlin was voted “Coolest Small Town in America” in 2014. There was a reason for that and it’s not just because it’s where they filmed Pretty Woman and Tuck Everlasting and we’re only five miles from the ocean. It’s because it’s America at its best.

“Why?” you ask. Well, since you’re dying to know…It’s the type of place that has that true sense of community. 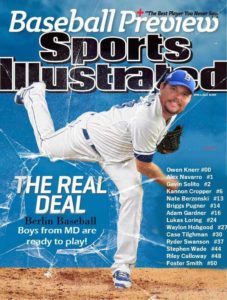 Like when someone hurts, we all hurt. People pitch in. They care and baseball allows us to cheer each other on, pick each other up and encourage one another. It brings folks together that otherwise might never meet.

The kids make memories that they don’t realize they’re making. They’re too young to recognize the good old days while they’re happening. I watched my son, Cameron’s Maryland State Little League team, play in the Mid Atlantic games on television. Watching him coach at that level when he didn’t have a kid on the team, made my heart sing. He was the delight of the ESPN announcers with his great attitude, Chris Farley imitation, and dancing antics in between innings. Facebook blew up with memes of him. The Town of Berlin was having a blast with fundraisers and drinks named in their honor. Only problem was, I wasn’t home to enjoy it…

But, during the championship games, I found myself on a pre-scheduled vacation in Gloucester, Massachusetts. I decided to go to the final game and drove in the pouring rain for two of the three hour drive before the clouds parted and the sun came out. Yep, I get “fan of the day” for that trip. They’d been worried the weather would prevent us from playing, but all was clear when I arrived. I parked and walked what seemed like a mile to the stadium. The air was charged with excitement from the dugout to the bleachers. TV cameras scanned the crowd and Cameron stood behind home plate hitting infield to loosen up the players. He turned and waved to me. I waved back and we blew each other a kiss. In that moment, I knew I was living yet another good old day.

Winning this game would send Berlin to the Little League World Series, but it wasn’t meant to be. We lost to the New York team and their pitcher threw a perfect game, no walks and no hits. You can’t fight a perfectly pitched game. When it was over, tears flowed down the cheeks of a few Boys of Berlin. 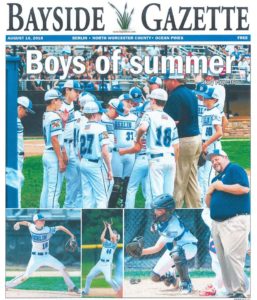 Cameron told them to save the tears for when they really counted, like when they lost someone they loved and not for a baseball game. He reminded them of what a good job they had done and all that they had to be proud of. It’s heartwarming and a little surprising when one hears such wisdom coming out of your own kid’s mouth. He will always be ten years old to me (always was big for his age…). While losing the championship game was a disappointment for the Boys of Berlin (Cameron included), they will one day discover those were good old days with awesome memories that will live on long after their sadness goes away.

The World Series went on without us. Hawaii won over South Korea in the Little League World Series a few weeks later. It was awesome to see a state that was going through a volcano and hurricane have so much to cheer about. The Hawaii coach told his players while they were still on the field celebrating to be “Humble,” he kept saying, “Humble,” over and over to them. They were living their good old days with humility. It appears we can all take away more than a few lessons from our Little League coaches. 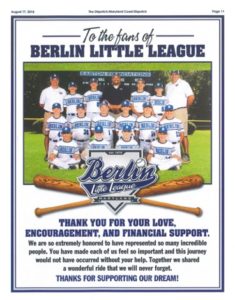