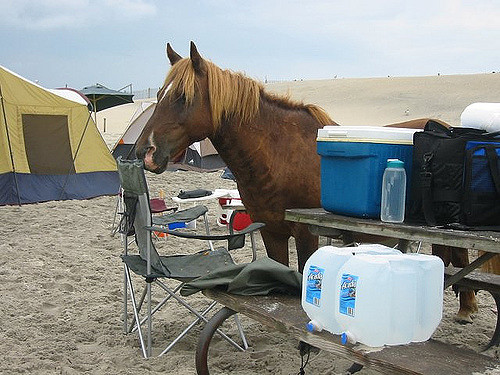 I grew up camping, not because we loved the outdoors, but only because we couldn’t afford a hotel at the beach for a week (you’ll hear lots about it in my upcoming novel, “Stuck in the Onesies”). We were definitely not the outdoorsy types, but managed to sleep on the ground (before air mattresses), cook over charcoal, and shower in a bathhouse with less than adequate hot water. Living at the beach for a week made it all worthwhile, most of time.

Sitting alone with my coffee in the morning, it was fun to watch the neighborhood of campers wake up. Where else can you watch folks walk to the bathroom in their pjs? My theory of wearing sweats for pjs is validated at last.

If you watch the campers closely, you can catch a dad ducking behind a bush when he exits the tent instead of heading to the bathhouse. The world is after all, a man’s toilet. Am I right?

We started out in a tent, graduated to a pop up camper (that had several not-so-minor leaks in the roof, hence the great price), to a pull behind camper, and eventually, a real-life RV that we could drive. Yep, we made it to the Tensies in the campground arena.

Anyway, back to the sissy part. We began our camping career at Assateague Island on the beach. Little did we know that this location was not for rookies.

We survived several storms, but one in particular tried to send us packing. While having a good time at Frontier Town (an amusement park few miles away) pretending to be cowboys and girls, we could see a storm off in the distance. Right in the direction of Assateague. At that point it was too late, so we stayed until the rain and wind came our way and chased us to the car. We drove through the downpour and by the time we arrived, the storm had passed us.

The door to the pop up camper was swinging wide open and the sideways rain had soaked all the mattresses. To add insult to injury, we had all our suitcases sitting under the camper and guess what, that sideways rain soaked everything we owned.

Imagine stuffing all clothing and linens into a Honda Civic (tiny car back in 1985), along with three kids and two adults and going to the laundry mat to dry it all out. Now that’s a fun time…compared to a root canal.

Then there’s the wild ponies of Assateague that roam the island. We often forget that it’s their home

and not ours. However, their lack of social graces is epic. Remember the pop up camper with the door that didn’t latch so well? We came home from the beach one day to find a pony with his head inside the camper working on his second cooler of food. Forgot to lock the door. Silly me.

Lessons learned? Yep, only bring one set of clothes and wear them at all times. You can wear the bathing suit underneath, or instead of regular clothes, if you want.

The problem with the ponies? Just go out to eat all the time and forget the cooler part except for drinks. The ponies don’t know how to open them anyway. Can’t afford to eat out all the time? Keep the cooler in the trunk…or fix the door. Trunk wins.

Many people joke that their idea of camping is the Holiday Inn. I say that if you’re up to the challenge, give it a try, camping that is. It’s a longer walk to the bathroom, but you where else can  you dodge pony poo on the sidewalk and listen to the skeeters hum a few bars in your ear?